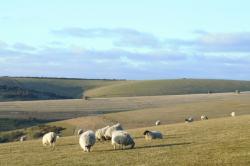 Ditchling Down is situated just south of the village of Ditchling in East Sussex, England. The chalk down is next to the site of Ditchling Beacon, the third-highest point of the South Downs . Ditchling Beacon was once part of an ancient chain of beacon sites used to warn of enemy invasion in times of war. The area is noted for its flora and fauna, butterflies are especially common there. Flowers and herbs typical to chalk grassland, such as marjoram, thyme can be found growing there. Certain types of orchid, particularly the common spotted orchid, are also found at the site.