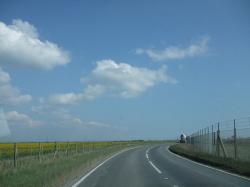 Camber Sands is a popular beach by the village of Camber, which is near Rye in East Sussex. The sandy beach stretches east from Rye Bay and the estuary of the Rover Rother all the way to the border between Kent and East Sussex. It lies on the seaboard of the Walland Marsh which stretches behind it into Kent and Sussex.

Camber boasts seven miles of Blue Flag award winning beach, making it a magnet for visitors. Camber Sands is also the only sand dune system found in East Sussex. It is a site of scientific interest, geographical interest and nature conservation due this important dune system.

Wildlife abounds at Camber, despite it being often busy with visitors enjoying the wide beaches and sheltering dunes. The brown-tail moth caterpillar lives on Camber's sea buckthorn, a spiky shrub with bluish leaves. Skylarks can sometimes be heard singing at Camber. Out in the waters you might find the weever fish that lives on the sandy sea bed. When the tide goes out, it buries itself in the sand. It has a ridge of sharp spikes across its back which will give a nasty sting if trodden on.

Camber Sands is a very popular location for kitesurfing, kiteboarding and kite buggying. The open expanse of beach, the compact sand and favourable wind conditions are all perfect for these activities. Kite launches are now only allowed in the designated area found at the eastern end of the beach, near the Jury's Gap car park.

There are good facilities at Camber including toilets with disabled access, dog bins and control zones. The all important Coastal Control Office deals with lost children, dispenses first aid, provides information and has a direct line to the police and emergency services. Camber village has a number of cafes and chip shops as well as a couple of general stores, a post office and the usual shops selling beach goods. There are also some amusement arcades and a couple of pubs. Plenty of accommodation can be found locally, although the quality varies widely with everything from camping to hotels on offer. There is a Pontins holiday camp at Camber Sands.

The beach has featured in many films, the dunes often having to stand in for the places as far afield as the Sahara Desert (Carry On Camel). Camber was also used as the location to film the D-Day landing scenes in the epic war movie 'The Longest Day'.