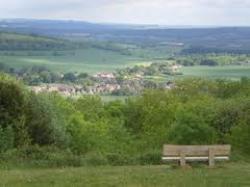 Harting Down is a large chalk downland situated in near the village of South Harting, near Chichester in West Sussex, England. The area is owned by the National Trust , and is part of the Sussex Downs Area of Outstanding Natural Beauty. There is a nature reserve at Harting Down and it has also been designated as a Site of Special Scientific Interest. The Iron Age earthworks at the site are thought to have served as an animal enclosure or show of wealth and power, rather than a defensive structure. The fort is a Scheduled Ancient Monument. Parts of the area have never been intensively farmed and are thus representative of the chalk grassland that once covered the South Downs .