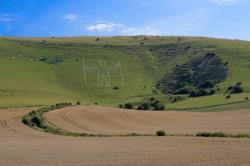 The South Downs lie to the south of the North Downs and the pair come together at the Wessex Downs , just inside the Hampshire border. The eastern end reaches the coast between Seaford and Beachy Head. The Seven Sisters , the undulating cliffs which are the remnants of dry valleys eroded by the sea, mark the spectacular western end of the South Downs.

There are four river valleys which cut through the South Downs; the Rivers Arun, Adur, Ouse and Cuckmere. The highest point in the downs is Butser Hill, which lies alongside the A3 trunk road, just south of Petersfield in Hampshire. The 886 foot chalk hill is a popular walking spot. Whenever there is any snow, Butser becomes crowded with those brave enough to attempt the frightening sledge ride down its steep slopes.

The South Downs is a magnet for walkers and ramblers. Their close proximity to many centres of population, such as Southampton , Portsmouth and Brighton , mean they are within easy reach of millions of people. A network of over 2000 miles of well-managed, well-signed and easily accessible trails has grown up making the downs an excellent and safe choice for walkers. The South Downs Way is the most famous and the longest of the walkways in the South Downs, it is trodden by literally millions of pairs of feet every year. The Monarch's Way originates at Worcester before crossing the South Downs to terminate at Shoreham-by-Sea .

The topography of the hills mean they are ideal for paragliding and mountain-biking. You will also often see people flying kites on Butser Hill in windy weather. Horse riding is extremely popular on the many miles of bridleways that thread their way through the South Downs.