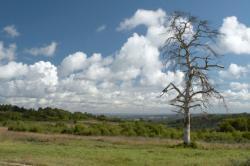 Before the books depicting this bear of little brain became a worldwide franchise, they captured a time of childish innocence, and an adult yearning to return to that innocence. They also showed a beautiful and ancient English landscape as a child would see it, noting the important things like bridges over streams and deep dark forests, rather than the architecture and the history of the place. Today with a little imagination we can enjoy both views.
The Milne family bought Cotchford Farm in Hartfield , East Sussex , in 1905, and made it first their country bolt-hole then their home. Christopher Robin Milne was born in 1920, and he and his stuffed toys provided the inspiration for his father, A.A. Milne , to write the Pooh books. It was the child's vision of the 'Enchanted Places' he and his nanny visited on their walks in and around Ashdown Forest here that were related via Christopher's mother to the writer. The Poohsticks Bridge can be seen, restored in recent years to match E.H. Shepard 's drawing rather than the original. The North Pole is on private land, but if you can find your way to Gill's Lap, the highest point in the forest, you will find a commemorative plaque and a panorama that takes in all the Pooh sites.
Hartfield is a village worthy of a visit in itself, with a nice old church with parts dating from the 13th century, narrow central street, three pubs, and plenty of half-timbered cottages. More significantly for Milne fans it also contains the original sweet shop used by Christopher Robin and Nanny Olive (not Alice - A.A. Milne altered the name for the sake of rhyme) to purchase boiled sweets, especially bulls-eyes. It is now The Pooh Corner Shop, dedicated to the books, with every item of Pooh merchandise you can think of housed within the 17th century building.
Hartfield was once a royal hunting ground, and Ashdown Forest gives an insight into those long past times. There is more than woodland to Ashdown Forest: it is a Site of Special Scientific Interest, with heath and bog habitats as well as ancient deciduous trees.
North of the village a more recent aspect of the place can be seen, Hammerwood Park , designed by the architect who went on to create the Capitol Building in Washington DC. This grade I listed building has been restored to its former glories after a period of near dereliction.
For visitors wanting a break from Pooh Bear The Bluebell Railway is just a few miles to the south west of Hartfield, and the lovely Arts and Crafts house of Standen , a National Trust property, is only a short drive west from the village.
A.A. Milne was of course only one of the creators of Pooh Bear. The other was the illustrator, E.H. Shephard (also responsible for the drawings we would recognize for Wind in the Willows, though his were in fact the fourth set tried). Shephard lived across in West Sussex, in the village of Lodsworth, with fewer than 700 inhabitants about a third of Hartfield's size. In spite of this, Lodsworth has much to commend it to the visitor: it is within an Area of Outstanding Natural Beauty; has a medieval manorhouse; and its church, St Peter's, is an unusual one, with elements that may pre-date the Normans. Shephard's grave can be seen in the churchyard.
Winnie the Pooh is as much a part of our literary heritage as Shakespeare or Dickens , and surely worth celebrating. A walk in the Hundred Acre Wood could well be the best way to do that, but travelling about the wider area around Hartfield, and further afield to Lodsworth, gives a glimpse of an England encapsulated in the books. It is an England of ancient forests and beautiful villages, of space and the wildness of common land, which sadly may not be with us forever - so visit it now and enjoy