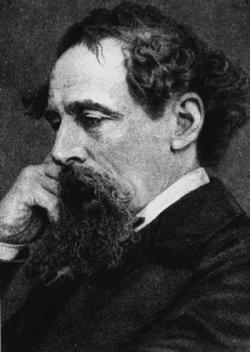 Born in Portsmouth, Hampshire
Born on 7th of February 1812
Died in Chatham, Kent
Died on 9th of June 1870
British hero of the week December 6th 2010

'The one great principle of Eng'... More

Charles Dickens was born Charles John Huffam Dickens on 7th February 1812, and died 9th June 1870. He was an English novelist of the Victorian era, as well as a great social campaigner. The popularity of his novels has meant that they have never gone out of print, and he is acclaimed as one of history's greatest writers. He was born in Landport, Portsmouth, the second of eight children to John Dickens, a clerk in the Navy Pay Office, and his wife, Elizabeth. When he was 5 years old, the family moved to Chatham in Kent, and when he was 10 they moved to Camden Town in London. He was educated privately at the William Giles School in Chatham up until his father was sent to Marshalsea debtors' prison, with the entire family apart from Charles, having to join him there later. He later based the character of Mr Micawber in 'David Copperfield' on his father. At the tender young age of 12, Charles was sent to work at Warren's Blacking Warehouse, near Charing Cross station in London. He lodged at the house of family friend, Elizabeth Roylance (immortalised as Mrs Pipchin in 'Dombey and Son'), and later at lodgings in Lant Street in Borough. Dickens' father John eventually inherited some money and was released from prison and after 3 years enduring appalling conditions in the blacking warehouse, Charles was able to return to school. He began working as a clerk in 1827 in the law office of Ellis and Blackmore, later becoming a court stenographer. In 1833 Dickens became a political journalist, covering parliamentary debate and writing sketches which appeared in periodicals under the pen-name, "Boz". In April 1836, he married Catherine Hogarth, daughter of George Hogarth who edited The Evening Chronicle and 'Sketches by Boz'. Within the same month, Dickens published the highly successful 'Pickwick Papers'. The couple set up home in Doughty Street, Bloomsbury, where they were joined by Catherine's sister, Mary who died there in 1837. They lived there for 2 years, during which time Dickens wrote 'Oliver Twist' and 'Nicholas Nickleby', which like most of his novels were first published in monthly instalments in different periodicals before being made into books. In 1842 Dickens travelled with his wife to North America, giving lectures against slavery and raising support for copyright laws. He lived briefly in Italy and Switzerland between 1844 and 1846, before his success continued with the publication of 'Dombey and Son' in 1848, the semi-autobiographical 'David Coppperfield' in 1849-50, 'Bleak House' in 1852-53, 'Hard Times' in 1854, 'Little Dorrit' in 1857, 'A Tale of Two Cities' in 1859, and 'Great Expectations' in 1861. He also edited weekly periodicals including 'Household Words' and 'All Year Round', as well as writing travel books. In 1856, his success allowed him to buy a country house, Gad's Hill Place in Highham, Kent, a place he had often walked past as a child. He and his wife had 10 children together but the marriage had started to falter, and in 1857, in preparations for a play he had written with his friend, Wilkie Collins, he met 18 year old struggling actress, Ellen Ternan, known as Nelly. The couple began a clandestine affair that was to last the rest of Dickens's life. Meeting Nelly was a watershed moment for Dickens whose life then took a different turn. He banished his wife Catherine to a house in Regent's Park and kept Ellen hidden away in secret locations in France and in rented accommodation in Slough. It is also believed the couple had a child together which died early in its infancy. On 9th June 1865, whilst returning from France with Ellen Ternan, Dickens was involved in a train crash in the Staplehurst area. The first 7 carriages of the train plunged off a cast iron bridge that was being repaired, and Dickens's carriage was one of the few left on the track. He set about helping the wounded and the dying until rescuers arrived, but was cautious not to be recognised and linked with Ellen Ternan and her mother, with whom he was sharing a carriage. He never quite got over the rail crash, and his writing thereafter shrank to completing 'Our Mutual Friend' and starting the unfinished, 'The Mystery of Edwin Drood'. Much of his time was taken up with public readings from his best-loved novels, and he immersed himself in the world of the theatre in order to stay in touch with the public of whom he was now so adored, as well as an escape from the secrets of his personal life. His travelling shows were extremely popular and he travelled all over Britain giving public readings, and making a second trip to America in 1868 for a reading tour. He was by now becoming exhausted by his work schedule and his personal life, and in 1869 he suffered a stroke. Through his journalism he had campaigned against issues such as sanitation and the workhouse, but his fiction changed public opinion in regard to being works of social commentary. He was a fierce critic of the poverty and class inequalities of Victorian society. He highlighted these political and social truths by his invention of comic- tragic characters and idealised heroes such as Tiny Tim in 'A Christmas Carol', and Oliver in 'Oliver Twist'. Dickens drew on his childhood experiences, but was also ashamed of them and never revealed that this was where he gathered his first-hand accounts of poverty and squalor. A shameful past in Victorian days could easily taint reputations, and as Dickens was a virtue of Victorian values, he never revealed that his family had lived in Marshalsea prison. In the end, his inexhaustible energy and schedule caught up with him and he died of a stroke at Gad's Hill Place in 1870. There was a vast outpouring of public grief when he was buried in Poets Corner at Westminster Abbey.

Contributors: Do you have a site related to Charles Dickens?
Supply some content for this page and we will gladly add a link to your site. Email here.