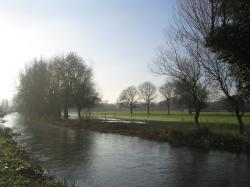 The River Itchen is a river that flows through Hampshire, in England. The river is 28 miles long and is one of Hampshires premier chalk streams for fly fishing. Some would even suggest it is among the best in the world. Designated as a Site of Special Scientific Interest, the River Itchen is noted for its high quality habitats and supports a variety of protected species including the brook lamprey, water vole, otter, and white-clawed crayfish. The source of the Itchen is found just south of the picturesque Hampshire village of Cheriton. From here the river initially strikes out to the north, through Cheriton and Tichborne . It flows on and joins up with two tributaries, the River Alre and the Candover Brook, just below New Alresford . It flows west from there down the upper Itchen Valley. From there it crosses the Winnall Moors before entering Winchester . The Itchen takes several different channels through the ancient city, some close to Winchester Cathedral and have caused serious problems to the building's foundations in earlier years. The river then heads south, through water meadows and runs between Eastleigh and Bishopstoke. Then the Itchen flows on through Itchen Valley Country Park . From here to the northern suburbs of Southampton at Mansbridge, sections of the river were once deepened or widened as part of the long disused Itchen Navigation. The canals towpath now forms part of the Itchen Way. The river flows on through Southampton to its confluence with the River Test estuary at Southampton Water.