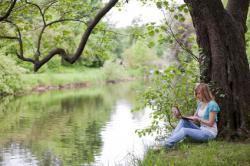 The River Test is a river in Hampshire, England that is famous for its high quality trout fly-fishing sites. The upper reaches of the Test are typical of the chalk stream environment and the quality of the water is such that it is serves to wash the paper used for British Bank notes. The Test is 40 miles long and is followed by The Test Way, a 44 mile long-distance walking route, for much of its course. It rises from its source near Ashe, just a few miles to the west of Basingstoke where it flows over the chalk downland. As the Test passes from the villages of Longparish and Middleton, to Wherwell and Chilbolton, the Rivers Dever and Anton join to the flow. At Kimbridge, the River Dun flows into the Test. On the western edge of Romsey is Sadler's Mill, an 18th Century watermill, sitting astride the River Test. Nursling was once the site of a Roman bridge and near here the river is joined by the River Blackwater before becoming tidal. The Test then broadens into a large estuary, with the container terminals and quays of the Port of Southampton on its northern bank. The Test estuary meets that of the River Itchen and both rivers finally reach
sea as Southampton Water.