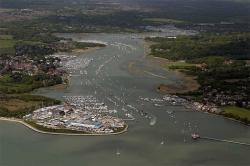 The River Hamble is a river that flows through Hampshire, England. The Hamble is tidal for about half its length and navigable far up its lower reaches. It is also relatively deep for much of its course, these features have combined to enable shipbuilding activities since at least medieval times. The Hamble remains an important and world-famous river for leisure craft production, chandlery and yachting to this day and its known as the Heart of British Yachting. From its source, among the chalk hills near Bishop's Waltham, the river flows in a southerly direction gathering a number of small tributary streams on the way to Botley. Below Botley, the site of an ancient watermill, the River Hamble becomes tidal and navigable by
larger craft. Its flow is swelled by the multitude of adjoining streams that drain the surrounding areas of Hedge End, Curdridge, Shedfield and Burridge. During medieval times, this was a busy shipbuilding area with timber grown locally in the neighbouring woods provided the raw materials. The Hamble flows rapidly to the south of Bursledon, where it runs between the villages of Hamble and Warsash and then on to Southampton Water. There has been a ferry to Warsash since the reign of Henry VII , it now caters for cyclists and foot-passengers.