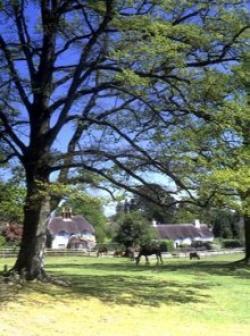 Despite nearly a hundred square miles of forestry commission land, the New Forest has very little woodland, with most of it being bleak, gorse and heather-covered heath land , occasionally blackened through fires started by careless tourists. Despite this, most of the 50 square miles of pretty, thatched cottage-filled villages give a friendly welcome to tourists, and campsites run by the forestry commission open between Easter and October. This results in the roads, which already have a very slow speed limit because of the free-ranging ponies, donkeys, cattle and pigs, becoming a form of Hell on bank holidays, blocked with cars and caravans. Burley , a medieval and extremely olde worlde style village with a strong witch craft theme throughout its many pretty, traditionally styled shops and coffee shops pulls in coach loads of tourists, somewhat ruining the whole effect.
A far better way to explore the New Forest, both for the environment and
stress prevention, is to cycle. Bicycle hire is available at Brockenhurst , which is central to around 150 miles of gravelled cycle paths cutting through woodland and heathland, far from the pollution of traffic. This is also the best way to get a glimpse of the local deer, though there is a viewing platform at Boldre wood, which is well worth a visit. Seeing the deer feeding and playing in this ancient woodland is magical on a winter dusk or crisp frosty dawn. On the other side of the road from the deer viewing platform is Rhinefield House Hotel with its ornamental drive full of huge rhododendron bushes, and the woodland itself includes an area of mature Red Canadian Pine trees.

Most of the New Forest's natural woodland pockets consist of an intermingling of saplings and mature varieties of birch, holly, yew, scots pine and conifers with ancient beeches and oaks - one such ancient oak tree, with the trunk circumference of 22ft is the Knightwood Oak, near Lyndhurst , the capital of the New Forest. Lyndhurst is extremely pretty and is where the New Forest Museum and Visitor Centre is based, but has an extremely annoying one way system and so is best avoided at busy times. Also near Lyndhurst is Rufus Stone - there's not much to look at, though the stone is in pleasant woodland and there's a good pub on site which those with an ironic sense of humour and awareness of the history of the stone will appreciate the name of, and camping.

The ponies of the New Forest have been carefully bred over the years, starting from Welsh ponies, over hundreds of years other English pony breeds were added, then heavier horse breeds such as Clydesdales and once Arab blood was introduced too. The ponies became very popular family riding and driving ponies, and many are still sold at auction. Despite cattle grids, ponies wander around freely along roads causing obvious dangers particularly around foaling time. Often they block the roads of Beaulieu village completely - please do not feed the ponies.

As well as ponies and donkeys snoozing in bus stops, Beaulieu itself has a nostalgic feel as one wanders around traditional shops, arts and crafts galleries and tea rooms. There is a lovely view over the lake to Beaulieu Palace House , over near the National Motor Museum and Beaulieu abbey. British motorcycle enthusiasts will also enjoy the Sammy Miller Classic Motorcycle Museum with everything from the Ariel to the Vincent, just 3 miles out of Lymington , the New Forest's seaside town, with cobbled Georgian style streets down to a view, and ferries, across the Solent to the Isle of Wight .