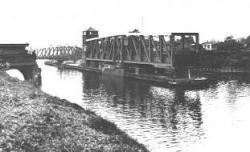 Manchester merchant Daniel Adamsons dream became a reality on January 1 1894: the Manchester Ship Canal was officially open to traffic  though the formal opening only took place on May 21 when Queen Victoria performed the ceremony, knighting the mayors of Salford and Manchester into the bargain. No longer could the manufacturing plants of Victorian Manchester be held to ransom by Liverpool s dock interests.
The work, which began on November 11 1887 , had taken far longer than expected  the original estimate had been four years  and cost three times the initial budget of £5 million. Even the Victorians got such projects wrong. But it was for a time the worlds greatest canal, a magnificent engineering scheme that linked the Mersey and Irwell rivers and supported the burgeoning factories of Salford and Manchester .
To this day the canal remains busy, though carrying nowhere near the amount of traffic seen at its peak, and it is very much a commercial waterway rather than a place for pleasure boats.