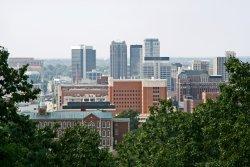 Birmingham
Did you know that the worlds first Odeon cinema opened in Birmingham in 1930.
Did you know that Britains first ever 4 wheel petrol driven car was made in the city by Frederick Lanchester in 1895.
Did you know that Birmingham has 22 more miles of canals than Venice.
Coventry
Did you know that the phrase sent to Coventry apparently originated during the English Civil War? It seems that in 1647 Royalist prisoners of war captured elsewhere in the Midlands were held in Coventry. In that robustly Parliamentarian stronghold the locals treated them as if they did not exist.
Did you know that Coventry was the only British City to lose a Cathedral during the WWII bombing on 14th November 1940 ? The ruins of the old one stand beside the new, designed by Basil Spence.
Did you know that the first ever English Bicycle was made in Coventry? Built in 1870 it was called the Ariel: with a large front- and small rear-wheel (fitted with solid rubber tyres) it is obviously the forerunner of the penny farthing, though far from as extreme in dimensions. Interestingly the Rover Car Company grew from the family firm that made the Ariel.