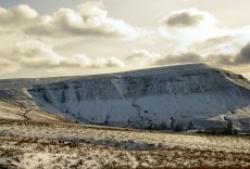 The Black Mountains (Y Mynyddoedd Duon) are a group of hills mainly in south-eastern Wales but also encroaching into a small part of Herefordshire in England. They are the hills north of Abergavenny , south of Hay-on-Wye , east of the Rhiangoll valley road (the A479) and west of, or on, the English border. They are the easternmost of the three groups of hills that comprise the Brecon Beacons National Park .

The highest mountain in the Black Mountain range is Waun Fach at 2,660 feet or 811 metres. Other notable peaks include Ysgyryd Fawr, Mynydd Troed, Graig Syfyrddin, Allt yr Esgair, Myarth, Mynydd Llangorse, Bryn Arw, the Black Mountain itself and Sugar Loaf. This mountain is apparently named after the sugar loaves once produced locally which had a similar form to the mountain's conical top.

One such is Cwmyoy Church, described as Britain's most crooked church. It is located seven miles north of Abergavenny and four miles south of Llanthony in the Vale of Ewyas. Centuries of subsidence caused the tower and chancel to move in opposite directions, twisting the entire structure. Some claim that the church tower leans more than the Leaning Tower of Pisa.

Llanthony Priory is also in the picturesque Vale of Ewyas. The partly ruined former Augustinian priory is at Llanthony, seven miles north of Abergavenny on an old road to Hay on Wye. The Skirrid Mountain Inn at Llanfihangel Crucorney is claimed as the oldest public house in Wales, being mentioned in records from AD 1100.

Llanfihangel Court is an Elizabethan manor house of considerable note. It is privately owned but open by appointment. The historic 15th Century Tudor manor features an important oak staircase and fine 17th Century panelling and plaster ceilings. There are wonderful landscaped gardens, stables and a large barn. The house was a reputedly used as a hideaway for Charles I during the Civil War .

Abergavenny has a ruined castle and keep, now used as a museum . The town is also home to the 14th-century priory church of St Mary's . At Castell Dinas, there's an 11th century castle built on the former site of an Iron Age hillfort. The castle lies between Talgarth and Crickhowell