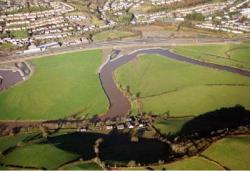 The River Tywi is sometimes known as the Towy. The river flows only in Wales and is the largest river with a flow that is exclusive to Welsh territory.

The River Tywi has its source on the lower slopes of Crug Gynan in the Cambrian Mountains . It flows on through the Tywi Forest where it forms the border between Ceredigion and Powys. In 1972 the Llyn Brianne reservoir was formed here by damming a section of the Tywi. The dam allows winter rain to be held in a reservoir enabling it to be released into the river during dry periods. The dam was constructed as part of the new abstraction at Nantgaredig . The waters abstracted here are required to supply a large swathe of south Wales with drinking water. The River Tywi would have been unable to sustain an abstraction of this magnitude were it not for the release of water from this upland reservoir. A small hydro-electric plant has now been added to the dam.

The reservoir feeds back into the river via the Llyn Brianne slipway, a spectacular slope of running water that has become a magnet for extreme kayaking. The area is very remote so although it is strictly forbidden to kayak down the slope, it is very hard to enforce this ban. When video clips showing some thrill seeking kayakers navigating down the very steep and long slipway made it onto the internet, and even onto the national news on television, the authorities promised to take more action to halt the practice.

The river runs south-westwards through Carmarthenshire where it flows through the towns of Llandovery and Llandeilo . It is joined in Camarthen by the tributary the Afon Gwili at Abergwili, this adds a substantial volume of water to the river's flow. The Tywi then flows into Carmarthen Bay, where it shares a combined estuary with the River Tâf and River Gwendraeth, to the east of the famous Pendine Sands . A 12th Century Norman castle, Llansteffan Castle, stands guard over the mouth of the Towy estuary.

The Tywi is noted for trout and salmon fishing. Unfortunately a great increase in the planting of conifers, has led to high levels of acidity in some of the river's tributaries. This has been blamed for killing fish in a number of locations.

Tradegy struck the river in October 1987. Four people died when a train plunged into the river at Glanrhyd Bridge near Llandeilo. Very heavy flooding had actually washed the bridge away.