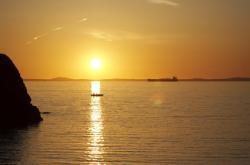 One of the many natural wonders to be found in Wales, Cardigan Bay is a beautiful stretch of coastline that lies on the West Coast of Wales. The bay is an inlet of the Irish Sea and stretches the majority of the west coast, running from the Pembrokeshire Peninsula to the Llŷn Peninsula. Surrounding the coastline is an area of particularly fertile farmland.

The coast itself is home to a whole string of seaside resorts. Among these are the towns of Aberaeron, Aberystwyth, Barmouth, Porthmadog, Fishguard, and New Quay. This stretch is known as the Cambrian Coast. The area has been popular for centuries with visitors attracted by its vast stretch of sandy beach and many claim that New Quay was the most likely place to have been the inspiration for Larregub in Dylan Thomas classic book Under Milk Wood. In the past New Quay was known both for fishing and for smuggling!

Dolphins are sighted regularly off the coast and the recent elevation of the status of the dolphin in peoples consciousnesses has meant a rise in the number of those seeking out the mammals. Even the rare bottlenose dolphin can be seen in the bay.  Some even attempt to swim with the dolphins for their alleged healing powers, although by British law approaching wild dolphins is illegal. If you are interested in the marine life of the bay, you should visit the Cardigan Bay Marine Wildlife Centre. This is a public information, education and research centre. The maritime life of the bay is so rich that parts of the bay have been designated as Special Areas of Conservation (SAC). This is designed to ensure that this rich belt of marine life endures for future generations to enjoy.

Cardigan was once a very important port, part of the thriving maritime industry that gradually waned with the onset of the twentieth century. It was even considered a more important port than Cardiff in its heyday.

It is not just the sandy beach that makes this stretch of coastline attractive, its rugged cliffs and ancient footpaths attract walkers and climbers to the area. The diversity of the Cardigan Bay area means it is popular with cyclists, snorkelers, fishermen and birdwatchers. There is plenty of accommodation of all kinds available there, including Hotels and Guest Houses as well as holiday parks such as the Cardigan Bay Holiday Park, situated only 300 yards from Poppit Beach.