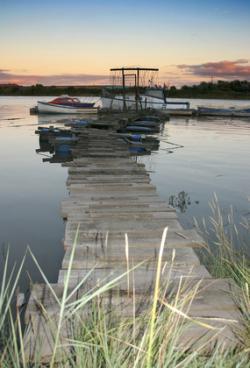 The River Usk (Welsh: Afon Wysg) flows through Wales to the Severn estuary. The usk rises in the Carmarthen Fans mountains (Fan Brycheiniog) in mid-Wales . The the river is tidal to the bridge at Newbridge-on-Usk, five miles to the north of Newport . The source is situated in the westernmost part of the Brecon Beacons National Park from where the river flows south-east through Brecon , Crickhowell , Abergavenny and the town of Usk itself. The river continues through South Wales, flowing past the Roman legionary fortress and amphitheatre at Caerleon , and on into Newport before finding the Severn estuary at Uskmouth. From its source high up in the Welsh hills, the River Usk passes through picturesque Welsh villages and the often wild but always beautiful scenery of the Brecon Beacons National Park. The rivers route takes it over craggy rocks and carries it through some thick woodland areas. The entire river has been designated a Site of Special Scientific Interest (SSSI). The estuary is complete with valuable mudflats and salt marsh, lagoons, bog and marsh as well as varied grassland and woodland habitats. The diverse flora and fauna include heron, salmon, trout, lamprey, otters, shad, twaite, perch, sea trout, chub, dace and roach. Dippers and red kite enjoy the upriver stretches where the colourful kingfisher is also sighted.