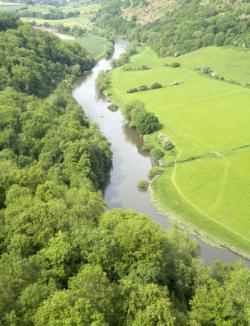 The Wye Valley, an area that straddles the border between Wales and England, has long been recognised for its beauty and has protected status as an Area of Outstanding Natural Beauty (ANOB). It is even credited as being one of the regions that created the modern tourism boom.

The River Wye, the fifth longest river in the British Isles, flows through the picturesque and often dramatic landscape. The landscape was formed by the action of ice during the last Ice Age and then further shaped by wind, rain and water through the centuries since the great ice sheets receded.

The River Wye is not contained in its entirety within the ANOB, which actually covers the 72 mile stretch of the Wye that flows from just south of Hereford to Chepstow . Upstream the Wye runs through the lovely towns of Rhayader , Builth Wells and Hay-on-Wye . Ross-on-Wye is the only town inside the area of the ANOB, which covers parts of Gloucestershire, Monmouthshire and Herefordshire. Monmouth , Chepstow, Hereford and Coleford are all situated just outside the ANOB.

Dense original woodlands and limestone gorges filled with wildlife typify the scenery of the Wye Valley, which is predominantly rural. The local economy depends on tourism, agriculture and forestry although it has also historically appealed to many people choosing the peaceful surroundings as a place to retire to. It isnt just retirees who choose the valley as their home, a colony of the very rare lesser horseshoe bat numbering 890 was recorded in a small stone barn in 2006. The Wye Valley is very important for its rich wildlife habitats. It has been designated as a candidate for Special Areas of Conservation (cSAC) under the European Unions Habitats Directive. Peregrine falcons, ravens, nightjar and the whitebeam are all resident in the Wye Valley as are fish such as the shad and the thwaite.

The Wye Valley has long been a very popular destination for walkers. The valley even has its own trail named after it, the 136 mile Wye Valley Walk is a wonderful mix of hill and riverside tracks. The walk takes you through remarkable contrasts in scenery from rugged and remote uplands to rolling meadows and orchards. Cyclists may soon have their own long distance traffic-free path through the Wye Valley. Plans for a cycle path following the lines of the disused 19th Century Wye Valley Railway line between Chepstow, Brockweir and Tintern are being developed by Sustrans.

There is plentiful accommodation for the visitor to the Wye Valley. Everything from hotels through holiday cottages to camp sites are on offer and the towns that fringe the ANOB are all well stocked with country hotels and guest houses .