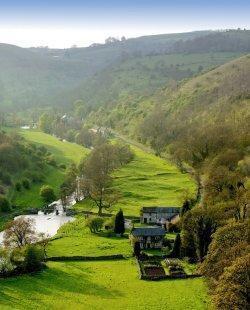 The Severn Valley is a mainly rural area of mid-western England. The valley is formed by the River Severn , Britains longest river. The regions boundary is not precise but it runs from around 25 miles due west of Birmingham in the West Midlands. It reaches down as far south as Gloucester and its northerly point is Ironbridge . The area to the north of Bridgnorth is known as the Ironbridge gorge and has steep sides. The Severn Valley is characterised by a broad riverbed and a fast flowing river that is surrounded by a small flood plain and gently rolling wooded hills. The soft sandstone banks of the Severn in this area make it difficult to build bridges that can bear heavy loads. For this reason the only public road bridges are at Bridgnorth and Bewdley . This means that there is no way for road traffic to cross the river for a 16-mile stretch. Riverside footpaths run along for almost the entire length of the Severn Valley on both sides, and these include the Severn Way long distance footpath. The valley is host to the Severn Valley Railway steam heritage line which runs from Bridgnorth, Shropshire and to Bewdley, Worcestershire in the Wyre Forest .