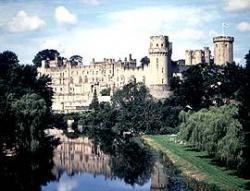 The River Avon that flows through middle England is also known as the Upper Avon, Warwickshire Avon or Shakespeare 's Avon. There are several rivers named Avon in England as the word 'avon' itself derives from 'river' in Welsh. This particular Avon flows through or by the counties of Northamptonshire, Leicestershire , Warwickshire, Worcestershire and Gloucestershire . The river is divided into two navigations each administered by a different board. One is called the 'Upper Avon Navigation' and the other the 'Lower Avon Navigation'. Confusingly the name 'Lower Avon' is also given to another river that runs to Bristol .

It rises at Naseby, in Northamptonshire , and then forms the border between Northamptonshire and Leicestershire from Welford to the Dow Bridge on Watling Street. A dam has been created along this section that forms the Stanford Reservoir. The river then heads through the Vale of Evesham, running near to the Cotswold Edge.

The Upper Avon flows through the towns or villages of Welford, Rugby , Wolston, Leamington Spa , Warwick , Stratford-upon-Avon, Welford-on-Avon, Bidford-on-Avon , Evesham and Pershore . The river is a tributary of the Severn which it joins at Tewkesbury .

Stratford-Upon-Avon is famous as Shakespeare's birthplace and has a host of attractions including theatres , museums and five houses relating to Shakespeare's life. Even without the Shakespearean attractions it is a quintessential English market town in a wonderful riverside setting.

The Charming market town of Evesham sits in a loop in the River Avon. Unfortunately the town's situation, originally chosen for its defensive advantages, has led to trouble with flooding. The town was severely effected when the Avon burst its banks in 1998 and 2007.

The Stratford-upon-Avon Canal joins the Avon via a lock in parkland near to the Royal Shakespeare Theatre in Stratford-upon-Avon. Alveston weir is two miles upriver. From the weir to Tewkesbury the construction of locks and weirs opened the river up to traffic as far as the River Severn. The commerce and industry that once drove the opening up of the river to boats has now gone, and the river's locks and weirs originally fell into disrepair. But in 1974, after years of work carried out mainly by volunteers, the river was reopened. Many of the locks had to be completely rebuilt and there was even opposition from some landowners along the river to the restorations. When the work was complete and the river navigable again it quickly became popular with leisure and even residential craft. There are now controversial plans to extend navigation, going further upstream than ever before, to meet the Grand Union Canal at either Warwick or Leamington Spa