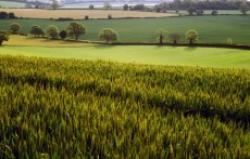 The Vale of Evesham is located in the southern part of the county of Worcestershire, England. The Vale is a sheltered region that consists mainly of flat and fertile land and is the flood plain of the valley of the River Avon . The Worcestershire market town of Evesham sits in the centre of the region and is itself a very rural settlement in an area with very little industry. The Vale of Evesham is predominantly agricultural, with an emphasis on market gardening with small producers still thriving alongside the very large concerns. There is some livestock farming but the Vale is perhaps nowadays most famous for the production of asparagus , especially in the villages to the east of Evesham, such as Badsey and Offenham. There are annual asparagus festivals and auctions, the most famous of which is held at the historic National Trust property, the Fleece Inn in Bretforton.
Fruit production in orchards was once a feature of the Vale but sadly these have been in steep decline in recent years. The Vale of Evesham is still home to the 150-year-old Cotswold railway line. Once known as the Oxford, Worcester and Wolverhampton Railway, the line was decimated by the Beeching report which saw the closure of stations at Littleton and Badsey.