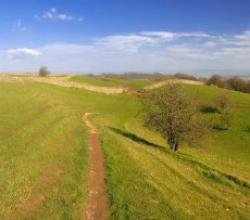 If youre in search of true English countryside then go no further than the Cotswolds. If you want to navigate the whole of the area however then you will have to go further, as this area of outstanding natural beauty  the largest in the UK - runs through six counties including Gloucestershire, Worcestershire, Oxfordshire and southern Warwickshire and takes in parts of West Wiltshire and Bath and North East Somerset in the South.

Gentle undulating hills and scenic valleys, including the Severn Valley and the Vale of Evesham , rise from the Thames to the northern and western edges of the Cotswolds which are marked by a limestone escarpment feature known as the Cotswold Edge which is the highest point of the Cotswolds and can be seen from miles away. If you really wanted to try and take in as much of the area as humanly possible you could tackle the Cotswold Way, a long-distance footpath about 103 miles long which runs the full length of the AONB. However we would recommend you just try doing a bit of it, and maybe doing it by bike.

It was the wool trade during the Middle Ages, that made the Cotswolds prosperous. Cotswold sheep were famous throughout Europe for heavy fleeces and high quality of wool, which commanded a high price. The wealth generated by the wool trade enabled wealthy traders to leave their mark by building fine houses and wonderful churches, known as wool churches. There are some beautiful examples of these scattered all over the area.

The area is full to the brim with attractive small towns and villages, built from the underlying Cotswold stone, used for everything from the stone floors in the houses to the tiles on the roof, which has created an impressive uniformity of architecture. Typical Cotswold towns that epitomize the English rural countryside are Bourton-on-the-Water , Broadway , Burford , Chipping Norton , Cirencester , Moreton-in-Marsh , Stow-on-the-Wold and Winchcombe . The town of Chipping Campden is notable for being the home of the Arts and Crafts movement, founded by William Morris at the end of the 19th and beginning of the 20th centuries.
In addition to the incredible countryside for outdoor pursuits theres a wealth of interesting places to visit throughout the area from gardens, historic houses, museums, nature reserves as well as some great railway and boating venues. Those that certainly make the top ten list are: Sudeley Castle and Gardens , Broadway Tower , Cotswold Wildlife Park and Gardens , Cirencester Park , Woodchester Mansion , Prinknash Abbey , Hailes Abbey , Winchcombe Railway Museum and Garden , Bourton Model Railway , Birdland Park and Gardens , Gloucestershire-Warwickshire Railway and Kennet and Avon Canal .