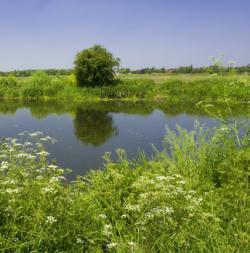 The Bristol Avon rises near Chipping Sodbury , between the villages of Old Sodbury and Acton Turville, in Gloucestershire. Two miles inside the Wiltshire border the river flows through the village of Luckington, and then on to Sherston. It joins up with its first major tributary, the Tetbury Avon, at Malmesbury . The town sits on an island created by a rocky outcrop and the two rivers. The river flows on to the market town of Chippenham , through the Avon Vale and on to Lacock and Melksham . Next it runs through Bradford on Avon and the Georgian city of Bath . As it nears the end of its journey it flows into Keynsham and then Bristol before joining the Severn estuary at Avonmouth.

The lower reaches, from Pulteney weir in the centre of Bath to the River Severn at Avonmouth, are navigable and this section is known as the Avon Navigation. The Kennet and Avon Canal connects with the Avon just below Pulteney weir and Bath Locks. This creates a continuous navigation, via the Kennet Navigation and the River Thames , for canal boats cruising from Bristol to London .

The Avon is extremely tidal along the lower reaches with a big difference in the level of the tides. This can lead to difficulties for river traffic and planning and knowledge are both essential. At Bristol the tide can vary the river's level by as much as thirty feet. The expression 'ship-shape and Bristol fashion' is supposed to have derived from the need for craft to be robust and have their cargo securely stowed to avoid damage during the long hours beached on the mud when the tide is out.

The problem was solved when the Avon was diverted from its original course in the centre of Bristol and onto the 'New Cut', a channel dug between 1804 and 1809. The original course is held at a constant level by lock gates and is known as the Floating Harbour. This gave the port an advantage by enabling shipping to stay afloat rather than grounding when the tide went down.

After Bristol the river passes through the deep Avon Gorge where it is spanned by Brunel 's magnificent Clifton Suspension Bridge.