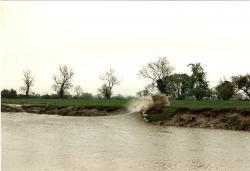 The Severn bore is a tidal movement of water along the River Severn . The river empties into the Bristol Channel and possesses the second largest tidal range in the world at just under 50 feet. The bore has been recorded to travel approximately 25 miles along the section of the River Severn between Awre and Gloucester .

The shape of the Severn estuary is such that the water is funnelled into an increasingly narrow channel as the tide rises, thus forming the large wave. Within just a few miles of the river's course it has narrowed from approximately five miles wide past Avonmouth to around one mile wide as it passes Chepstow and Aust, then Lydney and Sharpness. A little further upstream the river is just a few hundred yards wide and at Minsterworth it is less than a hundred yards across, a width it maintains all the way to Gloucester.

This rapid reduction in the rivers width is matched by a similarly reduction of the its depth. This conspires to form a huge funnel shape, an ever decreasing channel that the water is pushed up, which causes the surge wave or bore to form at fuller tides. The correct term for this wave action is self-reinforcing solitary wave or soliton. Spring tides tend to produce the largest bores and the Environment Agency publishes times and predictions of bore heights on their website.

The large surging wave can reach heights up to seven feet making it irresistible to people looking for thrills and spills. Despite the advice against such activity, given by the harbour authority for this stretch of water The Gloucester Harbour Trustees, surfers are particularly attracted to riding the bore. Surfers arent the types to pay much attention to official advice so the surfing is sure to continue. In September of 2005 a group of several hundred surfers converged on Newnham on Severn . They were there to celebrate the passing of 50 years since the first recorded attempt at surfing the Severn Bore.

The bore has been written about throughout history, in 1824 Thomas Harrel wrote "When the boar comes, the stream does not swell by degrees, as at other times, but rolls in with a head...foaming and roaring as though it were enraged by the opposition which it encounter". Our ancestors attributed magical powers to the bore. The name Severn is thought to have derived from the name Sabrina, after the mythical story of a nymph drowning in the river.