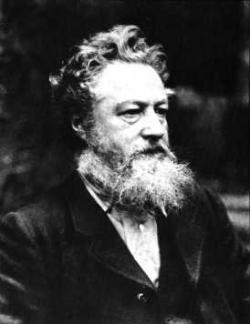 Born in Walthamstow, London
Born on 24th of March 1834
Died in Hammersmith, London
Died on 3rd of October 1896

The great Edwardian designer and craftsman is often quoted for his memorable aphorism: Have nothing in your house that you do not know to be useful, or believe to be beautiful. William Morris was also a committed socialist, a writer and poet (with a particular love of Icelandic sagas), a publisher who championed clear type-faces and the English classics, and a founding member of the Arts and Crafts movement.

William Morris was born into a wealthy family living in Walthamstow, then outside London, on March 24, 1834. He grew up with a love of nature and reading, able to indulge the latter passion in his religious studies at Exeter College, Oxford. Here he was influenced by John Ruskin and became friends with Edward Burne-Jones who was to introduce him to the Pre-Raphaelites, a group of artists who shared his distaste for industrialization and harkened back to an idealized mediaeval age. In 1861 with his Pre-Raphaelite friends Morris formed Morris, Marshall and Faulkner and Co. The company was to transform English taste in furniture and decoration and make Morriss designs in wallpaper, furniture and textiles universally admired. In 1875 Morris reorganised the company with himself as sole owner.

With his love of craftsmanship and history Morris saw early on the need for preservation and founded the Society for the Protection of Ancient Buildings, a forerunner of the National Trust. Morriss utopian dreams also found expression in political thought and from 1883 onwards he was a committed socialist, writing and campaigning for a more equable society. In 1884 along with Walter Crane, Eleanor Marx and Edward Aveling he formed the Socialist League and became the main contributor to its journal Commonweal. Until the end of his life Morris remained a political writer, the best known of his many books being the utopian fantasy News from Nowhere. William Morris died in 1890 and was buried at Kelmscott, Oxfordshire.

Contributors: Do you have a site related to William Morris?
Supply some content for this page and we will gladly add a link to your site. Email here.