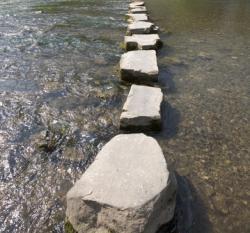 The River Clun is a river that flows through Wales. The river rises on the western slopes of The Garth, a mountain located between Cardiff and Pontypridd . It flows for just fourteen miles through the counties of Cardiff and Rhondda Cynon Taf in South Wales and is a major tributary of the River Ely. The upper reaches of the river run over steep ground and its a fast flowing river as it crosses the county boundary into Rhondda Cynon Taf around three and a half miles from the source. The River Clun flows into the River Ely at the town of Pontyclun. The name Pontyclun translates into English as River Clun bridge.