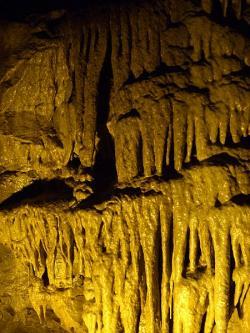 One of Britain's hidden treasures, Dan yr Ogof was named as the greatest natural wonder in Britain in a 2005 poll of Radio Times readers. Dan yr Ogof means 'Beneath the cave', the Morgan Brothers who first explored the caves named them after their farm. Dan yr Ogof is a ten and a half mile long cave system in south Wales, it lies five miles north of Ystradgynlais and fifteen miles south west of Brecon . It is within the Brecon Beacons National Park .

The caves were once carboniferous limestone and formed some 315 million years ago. Cracks and fissures in the rock allow water to flow through and dissolve the limestone, this action carved out the cave system. The river Llynfell emerges from a cave at the base of the cliffs at Dan-yr-Ogof farm.

Three caves make up the system. They are the Dan yr Ogof Showcave, the Cathedral Showcave and the Bone Cave. The caves are well known for their spectacular show of geological formations. In the Dan yr Ogof Showcave the commonest forms on show are stalactites and stalagmites which develop downwards and upwards, respectively. However, a rare feature is evident here is helectites, which grow out sideways. In Cathedral Cave it is possible to walk behind two forty foot high waterfalls and experience the 'Dome of St. Paul's'. The bones of some 42 humans, as well as numerous animal bones, have been found in one of the nearby chambers of this cave system.

The Showcave also features great quality examples of flowstone and curtains. In the Bone Cave the stalactites are in the rare and unusual form of huge bosses, covered in a white deposit. This is known as 'Moonmilk' because of its strange texture, which has been compared to thick yoghurt! It is actually a form of calcite in which the crystals have large quantities of water, and sometimes mud, trapped around them.

Dan yr Ogof is the main feature of The National Showcaves Centre for Wales . The Centre is claimed to be the largest in Europe and is a major tourist attraction in Wales. The primary section of the cave system is open to the public. Behind this is an extensive cave system. This section is scheduled as a National Nature Reserve and is open only to experienced and properly equipped cavers. The National Showcaves Centre has several other attractions. The centre has a Dinosaur Park with over 50 life sized dinosaurs, the Millenium Stone Circle and an authentic Iron Age farm. There's also the Shire Horse Centre and a museum.