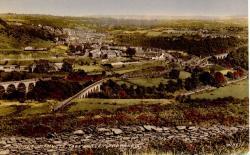 The Taff Valley is situated in South Wales, in an area that witnessed the birth of the Industrial Revolution and the rapid industrialisation of the once rural landscape. The valley saw the worlds first ever locomotive journey when on 21 February 1804, as the result of a 1,000 guinea bet between Samuel Homfray and Richard Crawshay, Richard Trevithick 's steam locomotive hauled a load of iron along the tramway to Abercynon. This milestone in the Railway Age is now commemorated by the Trevithick Trail. The valley is home to the river Taff (Welsh: Afon Taf) which is itself formed by two smaller rivers - the Taf Fawr and Taf Fechan. Both these tributaries rise in the Brecon Beacons. The rivers meet above Merthyr Tydfil at Cefn Coed y Cymer. An impressive curving viaduct now carries the Taff Trail across the river at this point. Merthyr Tydfil was one of the most important places in the industrial revolution and was known as the Iron capital of the world. The Taff Trail is 55 mile cycling and walking route linking Brecon and the mouth of the Taff at Cardiff Bay , it is one of the best ways to enjoy the sights, scenery and attractions of the Taff Valley.