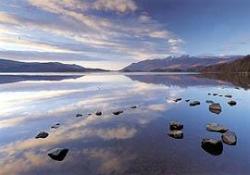 Barrow in Furness
Did you know that if you want an instant knighthood  without having to give money to a political party  the place to go is Piel Island off Barrow-in-Furness? The landlord of the Ship Inn there is known as the King of Piel Island, and he can make you a Knight of Piel Island if you buy a round of drinks for all present (so like Westminster but on a smaller scale). And into the bargain you will be fed and watered there for free  if you are ever shipwrecked on its shores.
Bowness on Windermere
Did you know that the first Italianate roundhouse to be built in Britain is to be found on Belle Isle, off Bowness-on-Windermere? Inspired by the Villa Vicenza in Rome, and designed by the architect of St Marys Paddington Green , it was begun in 1774. Though now an object of architectural distinction (seen from afar as the island is privately owned) it was attacked and ridiculed so much that the work was halted for many years: Wordsworth called it a pepper-pot; and likened it to a tea canister in a shop window.
Carlisle
Did you know that Her Majestys Theatre in Carlisle was the first Theatre ever to be lit by Electricity in 1880
Did you know that the 1st mainland pillar box went up on Botchergate in Carlisle in 1853.
Did you know that Carlisle could claim to be the most cosmopolitan city in Britain  in terms of rulers? It was founded as Luguvalium by the Romans; when they left in the early 5th century the Picts took it over; the Vikings were next on the list; and the Scots displaced them. The Normans added Carlisle to their territory after the Conquest; the Scots retook it in the 12th century; and the English got it back later. It even fell to Bonnie Prince Charlie in 1745.
Did you know that the M6 Motorway Rugby to Carlisle is the longest motorway in Britain at just over 226 miles
Cockermouth
Did you know that William Wordsworth attended the same school in Cockermouth as Fletcher Christian  Cockermouth Grammar School? The age difference between them  the poet six years younger than the mutineer  means they would not have been companions; but in later life Wordsworth did help Fletchers brother Edward compile a legal case intended to rebut what Captain William Bligh had reported about the Bounty affair.
Kendal
Did you know that the worlds oldest manufacturing machinery still in use is to be found in Kendal? Snuff makers Samuel Gawith and Company uses plant made in 1750, bought second hand in Glasgow in 1792 by Kendal resident Thomas Harrison and shipped to South Lakeland on packhorses. It has endured at least three moves that required dismantling. They truly dont make em like they used to.
Keswick
Did you know that Percy Shelley honeymooned in Keswick? Not with Mary, his second wife; but with Harriet, his first. She was just 16, he 19 and recently sent down from Oxford for authoring an atheist pamphlet. They rented Chestnut Hill Cottage in that lovely old town. It all ended in tears of course: three years later Percy abandoned the pregnant Harriet for Mary Godwin, another 16-year-old (which does make one wonder); and two years further on poor Harriet drowned herself in the Serpentine.
Ulverston
Did you know that Pole Vaulting, as a sport, was invented here in the 1879? Pole vaulting to cross waterways had been a technique employed around the world for centuries, including on the fells of Lancashire over the Water, but at Ulverston Cricket Club in 1879 a competition to use poles for height was (as it were) launched. Neighbours a bit north in Greystoke may argue about this as a first  it is claimed a Mr Alcock cleared nine feet at an event held at Greystoke Races in 1839
Whitehaven
Did you know that during the American War of Independence Whitehaven was briefly invaded by American forces? Father of the US Navy John Paul Jones, born in Kirkbean Dumfriesshire just a short sail across the Solway Firth , raided the town in April 1778 . He took the fort, spiked its guns, burned a few coal ships, and made off in his vessel Ranger with three prisoners. In the midst of which his men went to a quayside pub, sinking far more alcohol than they had colliers.