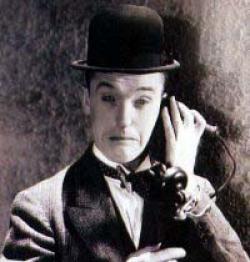 Arthur Stanley Jefferson, better known as Stan Laurel, one half of the legendary comedy duo Laurel and Hardy, kept up the persona of the clown until the very end. Laurel died on February 23, 1965 after suffering a heart attack, and is buried at Hollywood Hills Cemetery in Los Angeles. He wrote his own obituary warning mischievously: If anybody has a long face at my funeral Ill never talk to them again.

Laurel was born on June 16, 1890, in Ulverston, Cumbria but spent most of his young life in Bishop Auckland, County Durham, where he became an active participant in local theatre groups. He made his professional debut at Glasgows Britannia Panopticon when just 16. Laurel was destined for fame and the dizzying heights of Hollywood when in 1910 he joined Fred Karnos army, Charlie Chaplin some years before he gained worldwide fame being another member of the troupe. Laurel toured America with Karno, and met a rotund gentleman named Oliver Hardy on the set of silent film Lucky Dog. The rest, as they say, is history. The pairing went on to star in more than 100 films together including Sons of the Desert, Way Out West and Block-Heads. Though slapstick comedy and visual gags dominated the action, the plot inevitably required Hardys exasperated line to his hapless partner: Well thats another fine mess youve gotten me into. Morecambe and Wise, the Two Ronnies, Little and Large, French and Saunders, the list is nigh on endless, but perhaps the worlds best loved comedy double act remains the thin Englishman and heavy-set American, Laurel and Hardy. As a testament to their enduring popularity the comedian Ken Dodd unveiled a bronze statue of the duo on April 19, 2009, in Ulverston, Laurels place of birth, where a museum celebrates their work.

Contributors: Do you have a site related to Stan Laurel?
Supply some content for this page and we will gladly add a link to your site. Email here.