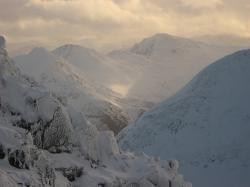 Aonach Mòr is a mountain situated in the wilderness that is the Highlands of Scotland. The peak lies two miles to north east of Ben Nevis and is located on the south side of Glen Spean. The Highland settlement of Fort William is the nearest town. At 1,221 m (4,006 ft) Aonach Mòr is actually 13 metres lower than Aonach Beag. The use of Mòr might be taken to suggest that it is taller than its neighbour but in fact refers to the overall size of the pair of peaks when viewed from the valley below. The pair tend to be overshadowed by the neighbouring Ben Nevis in fame, but not in form as Aonach Mor and Aonach Beag are part of an extensive and prominent north-south ridge. Although situated in a wild and remote part of Scotland the region has seen extensive leisure development, including the arrival the Nevis Range ski area on the northern slopes of the peak. The Coire an Lochain, which is part of Aonach Mòr, is host to one of Scotland's longest lasting snow-patches. The summits of the mountains in the area have long been a compelling draw to mountaineers. Aonach Mòr has by no means escaped their attentions and is a popular climb.