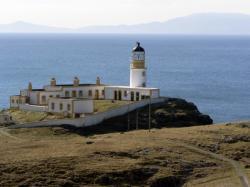 Cape Wrath is Scotlands most north westerly point and one of the last untouched  areas of wilderness in Britain. The area that lays between the Kyle of Durness and the lighthouse on the tip of the Cape was once home to a small community that struggled to make a living from the sea and the harsh terrain. Now the people have gone and the area is populated only by deer and sea birds. It has been designated a Site of Special Scientific Interest. Although the name Wrath seems to fit the wild nature of the place, the word actually derives from the Norse for turning point as the headland was once used as a navigational aid by Vikings . Cape Wrath is one of only two places in Britain called cape; the other is Cape Cornwall at the opposite end of the United Kingdom. Situated about three miles east of the lighthouse are the Clo Mor Cliffs, the highest sheer cliffs in Britain with a drop of 921ft. These cliffs are home to an immense seabird colony with tens of thousands of guillemots, fulmars, kittiwakes, puffins and razorbills. Access to the Cape is by local ferry across the Kyle of Durness, but this only runs between May and September. A minibus then takes you on the final 12 miles by road to reach the lighthouse.