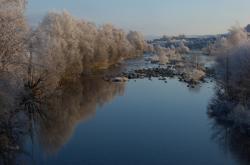 The River Spey is a river that crosses the north east of Scotland. It has been recorded as the second longest and the fastest flowing river in Scotland and the seventh longest in the UK.

The river rises high up in the Cairngorms , at a level of over 1000 feet, at Loch Spey in Corrieyairack Forest. From here, 10 miles south of Fort Augustus , it flows down to Newtonmore and Kingussie before crossing Loch Insh. Then it runs on to Aviemore at the start of Strathspey. It covers the remaining 60 miles to reach the sea at the Moray Firth .

The Insh Marshes are two areas of roughly two miles each, situated on either side of the Spey in the lower reaches. They are designated as a Site of Special Scientific Interest. The same designation was given to the extensive shingle systems at Spey Bay.

The river has traditionally supported a variety of local industries. Salmon fishing is still an important industry on the river. Garmouth was once the shipbuilding capital of the UK. Timber from the forests around Aviemore and Aberlour was rafted down the river for the production of wooden hulled ships.

The river is well known for the its purity and therefore the quality of its salmon and trout fishing. This, and the spectacular surroundings, make the river extremely popular with anglers. They are drawn from all over the world, not only by the great fishing prospects but also by the special nature of the river. The river is snow fed by the Cairngorm Mountains and this can sometimes mean the river stays high until early June, giving better fishing conditions for longer.

The purity of the water makes it a favourite with the distillers of Scotland's national tipple. The Speyside distilleries produce more whisky than any other region of Scotland.

The river is extremely popular with canoeists. Holidays are on offer designed around exploring the river and its surroundings using canoes. As with any picturesque rural location the river's course is popular with walkers and ramblers. The Speyside Way is a long-distance footpath that follows the River Spey through some of the most beautiful scenery Morayshire has to offer.

The Spey railway bridge joins Spey Bay to Garmouth. The bridge was originally designed with the main span positioned over the main flow of the river. However, by the time construction was completed the river had changed its course and was running at one end of the bridge