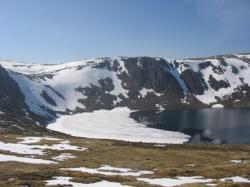 The Cairngorms are the most extensive range of high arctic mountains in Britain. The name Cairngorms is derived from the mountain of the same name, Cairn Gorm. However, this name was coined by 'outsiders' and the true name for the area is Am Monadh Ruadh meaning the red hills or mountains. This distinguishes them from Am Monadh Liath, or the grey hills, which lie to the west of the River Spey . As the meaning of Cairn Gorm is 'Blue Mountain' this makes the use of the word Cairngorm, for what are actually the 'Red Mountains', rather ironic.

The Cairngorms are situated within the Cairngorms National Park. The park was established in 2003 to protect the valuable and delicate countryside of the Cairngorm region. It is Britain's largest National Park and, as well as the mountain range, it has a vast area of tundra-like wilderness at its heart. It includes moorlands, forests, rivers, lochs and glens within its boundaries. The Park covers a vast area from Grantown on Spey to the heads of the Angus Glens, from Ballater to Dalwhinnie and Drumochter. It includes a large part of the Laggan area in the south west and much of the Glenlivet estate . Part of the Strathdon and Glen Buchat area also lies within its boundaries.

Sites designated as of importance to natural heritage take up 39% of the land area, two thirds of these are of Europe-wide importance. It is home to some 16,000 people, although the actual population density is very low. The National Park contains 25% of Britain's threatened birds, animals, and plants. Five of Scotland's six highest mountains are found in the region: Ben Macdhui, Braeriach, Cairn Toul, Sgor an Lochain Uaine and Cairn Gorm itself.

The beautiful valleys of the River Spey and the River Dee are within the park and boast a stunning landscape of Caledonian pinewoods, rich in wildlife. The area's best known resort is Aviemore and other Spey towns include Kingussie , Newtonmore and Grantown-on-Spey. Deeside's main urban area is Ballater but it is also home to the picturesque village of Braemar . The royal seat at Balmoral Castle lies between the two rivers. To the north east lie the remote and rolling hills of Glenlivet, in an area world famous for its whisky distilleries . There is a famous RSPB (Royal Society for the Protection of Birds) reserve at Abernethy Forest and Loch Garten.

Although there are public roads reaching into the National Park itself, none of these cross the actual area strictly defined as the Cairngorms.

The Cairngorms offer a wealth of activities and attractions. It is home to three of Scotlands five winter sports resorts, the Cairngorm Ski Centre , Glenshee Ski Centre and The Lecht Ski Centre . The mountains are also a magnet for hill-walking, cycling, bird watching, climbing, deer stalking, gliding and fly fishing.

A funicular, or mountain, railway opened in late 2001. It runs for 637 metres ending at the Ptarmigan Centre, situated at 1097 metres, 150 metres from the summit of Cairn Gorm.