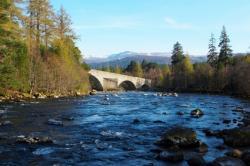 The River Dee (Welsh: Afon Dyfrdwy) travels through Wales and England and, in places, it forms both a natural and official border between the two countries. The river rises on the slopes of Dduallt above Llanuwchllyn in the mountains of Snowdonia in Wales. The river runs north, passing through the ancient city of Chester.

The Chester section of the riverbank is a popular recreation area, complete with a bandstand, benches and boat cruises and two interesting bridges. The first is the Queen's Park Suspension Bridge, the only exclusively pedestrian bridge across the river in Chester. The second is the venerable Old Dee Bridge. This road bridge is the oldest bridge in Chester. It was built in 1387 on the site of a series of wooden predecessors that dated back to the Roman period.

The River Dee then meets the Irish at the Dee Estuary which lies between Wales and The Wirral Peninsula . Centres of population along the Dee Estuary include the Welsh towns Flint , Holywell and, on the Wirral , the English towns of Mostyn and Neston, Parkgate, West Kirby and Hoylake .

Large areas of the river's catchment is agricultural and modest amounts of the river are drawn off for use in summer irrigation. Further down river from the farms the Dee once supported a range of industry. While industry's effect on the river is not quite as devastating as it once was, the river still supplies water and a place to discharge cleaned up effluent into. The gas fired power station Connah's Quay uses water abstracted from the river for cooling.

Canoeing used to be a popular sport on the Dee. However, recent disputes with the fishing community ended with the canoeing being almost completely banned from the Welsh section of river. Canoeing is now only permitted on one 100 metre long rapid less than a mile upstream of Llangollen . Some flat sections far downstream in England also allow canoes. Despite this ban, in an act of public defiance, many canoeists continue to use the river from other access points. Each July the popular Chester Raft Race is held on the River Dee in aid of charity.

Fishing is very popular along the Dee. The river is known for a mixed fishery with Salmon and trout fishing. These are found mostly in the upper waters with a good coarse fishery in the lower reaches. A major pollution incident occurred along the middle reaches late in 1990s. This caused serious and extensive damage to the fishery which took until recently to recover.

1 Response to The River Dee

From David Morris on 22nd August 2013
OOPS!!!! Why is there a picture of the Old Invercauld Bridge over the River Dee near Braemar in Scotland on the website for the River Dee in Wales??????