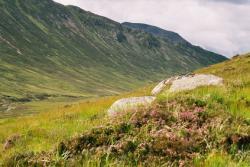 Ben Macdhui is a mountain situated in the Highland region of Scotland. The Scottish Gaelic name for the mountain is Beinn Mac Duibh. The name Ben Macdhui derives from the name of the Donnchad family who acquired the territory after the defeat of Domnall mac Uilliam in 1187 by the Earl of Fife , Donnchad II. The mountain lies on the boundary between Aberdeenshire and Moray and is situated on the southern edge of the Cairn Gorm plateau. At 1,309 m (4,295 ft) above sea level, Ben Macdhui is the highest peak in the Cairngorms range and this makes it the second highest mountain in the United Kingdom after Ben Nevis . Before accurate measurements were available it was once thought that Ben Macdhui was the higher of the two peaks. When the Lochaber peak at Ben Nevis was established as being officially higher, some locals planned to build a cairn at Ben Macdhui to bring it up beyond the level of Ben Nevis. However, the cairn was never constructed. The summit of the mountain features a direction indicator erected in 1925 by the Cairngorm Club of Aberdeen . Established in memory of a past president, Mr. Alexander Copland it shows the direction of important hills that are seen from the summit when the weather permits.