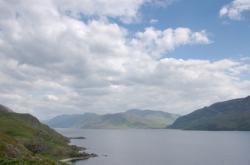 Loch Morar is the deepest body of freshwater in the entire British Isles and is claimed to be one of the deepest lakes in Europe. Situated in Lochaber , on the western side of Highland Scotland, it is the fifth largest loch in Scotland by surface area at 10.37 square miles. The glacial loch is almost 12 miles long. It is very deep at 1,017 feet and features very steeply sloped sides.

The area is very sparsely populated. This is in part due to its very remote location but also because of the notorious Highland Clearances that drove the indigenous folk out of their historic homes. The depopulation of the area has continued, although this time it is largely voluntary and driven by simple economics with many local young people leaving the area for the bigger cities further south. Many of the smaller hamlets, and even some country houses, have been abandoned or are now only used as holiday homes.

As with other Scottish lochs, most notably Loch Ness , the deep waters have given rise to stories of monsters. Loch Morar has its own legendary monster known by the locals as 'Morag'. Locals once believed that whenever Morag is sighted, she heralds the death of a member of the local branch of the MacDonald clan.

The loch was known for its once prolific salmon and sea trout runs. Unfortunately the populations of these fish has seriously declined and many unique genotypes are now extinct. This pattern has been repeated all over north-west Scotland's freshwater systems. Biological pollution in the form of parasitic lice from sea cage salmon farms is given as the main cause of this decline in the water's biodiversity.

The loch is famous for its white sands. Known as the 'Silver Sands of Morar', these incredible white beaches being gently lapped by the blue waters of the lake bring visions of Caribbean islands to mind. However, a dip in the lake's freezing waters would soon dispel that image!

The east end of the loch is particularly wild, mountainous and largely deserted. The west end of the Loch in the area around the village of Morar tends to draw the visitors, especially in summer. In fine weather this end of the lake can be quite busy with small boats. The village of Morar itself sits on a peninsula at the lake's western end. The village centre is marked by the Morar Hotel which stands opposite the railway station. The River Morar, which is one of the country's shortest rivers, carries the outflow of Loch Morar across narrow peninsula to the sea. On it's way to the North Atlantic ocean the river it falls 40 feet in some spectacular cascades.