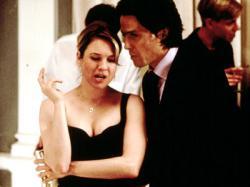 The film that made big pants socially acceptable. Many who read Helen Fielding s original newspaper columns felt filming Bridget Joness Diary wouldnt work, but happily they were wrong, the film is a delight, thanks in part surely to Richard Curtis of Notting Hill fame and Jane Austen adapter Andrew Davies being in on the scripting. Equally risky  for British audiences at least  was choosing Renée Zellweger to play Bridget, but her accent is impeccable and her comic ability a revelation  the two public speeches she makes are so cringe-making some audience members may find their bottoms self-seal. Zellwegers interplay with Colin Firth and Hugh Grant has moments of Hepburn/Tracy brilliance.
The tale of a 30-something singleton obsessed with men and why she hasnt got one, her weight, alcohol and smoking, incongruously has more than a nod towards Jane Austen. But this 2001 comedy of manners has very contemporary sexual mores, a fist-fight, gay friend and separated parents, and even a poke at teleshopping.
Any film using one-time National Theatre of Brent stalwarts Jim Broadbent and Patrick Barlow cant be bad; throw in the equally excellent Celia Imrie and Neil Pearson and you know the film will have comic depth. It does; but it also engages viewers who by the end are desperate for Bridget and Mark to get together, and for Cleaver to get his come-uppance, which they all do with Austen-like inevitability and neatness.