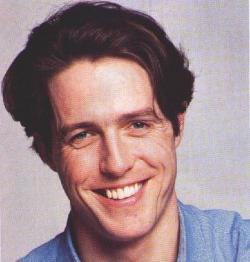 Born in Hammersmith, London
Born on 9th of September 1960
British hero of the week July 7th 2011

Studied English literature of Oxford. Made his film debut in Privileged (1982). Achieved success and fame with Four Weddings and a Funeral (1994). Involved in a number of failed productions and public sex scandals. Later successful films include Sense and Sensibility (1995), Notting Hill (1999) and Bridget Joness Diary (2001).

Links:
http://www.imdb.com/name/nm0000424/ Hughs page at the Internet Movie Data Base

Contributors: Do you have a site related to Hugh Grant?
Supply some content for this page and we will gladly add a link to your site. Email here.