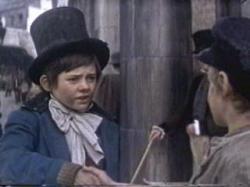 There is something essentially poignant about the 1968 musical Oliver! Not only did it feel like one of the last of its era, but for so many of those involved it was downhill financially and artistically after it. Lionel Bart who wrote the original show descended into alcoholism and bankruptcy. The angelic Mark Lester who played Oliver soon left show business. Artful Dodger Jack Wild was already drinking. And even Ron Moody whose portrayal of Fagin is the highlight of the movie probably never bettered his performance. But Barts songs are great  including Consider Yourself; Food Glorious Food; and As Long as He Needs Me  the choreography is full of energy and the sets capture the grubbiness of Victorian London perfectly. That dark aspect of the film, the brutality and nastiness, is epitomised by Oliver Reed s Bill Sikes, brooding and violent, even breaking the British taboo about cruelty to animals. Reed shot to stardom, but he too may have been at his best in Oliver! The film won that years best picture Oscar, a decision since criticised rather unfairly by many who prefer the arty to the entertaining. It also won another five Oscars, Carol Reed deservedly being awarded Best Director: he carries along Dickens  simple story of the orphan drawn into crime then saved by his penitent grandfather at rollicking pace, with charm and the danger too often missed in TV adaptations.