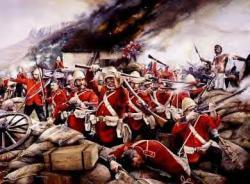 Though director Cy Endfield made great use of the African landscape, and the film is filled with bravura action sequences, it is surely for its imaginative use of sound that Zulu sticks in the brain. The Zulu impis beating their shields in menacing rhythm; the sound of bare feet charging across the sun-hardened earth; Ivor Emmanuel leading the Welsh soldiers in a nerve-steeling rendition of Men of Harlech; and movingly the Zulu chant as their retreating war-party pays homage to the bravery of their opponents, one of cinemas greatest moments. Zulu is also remembered as the film that made Michael Caine a star, for once using a posh accent as the seemingly effete Lt Gonville Bromhead: this may have been his best performance, a clever counterpoint to the grittier role of co-producer and star Stanley Baker . Rising above the merely patriotic and nationalistic Zulu shows the horrors of war, the weary surgeon played by Patrick Magee capturing the bloody futility of the conflict. The Zulus are shown to be as brave as the British defenders, and it is to them that the dramatic highlight of the departing chant belongs.