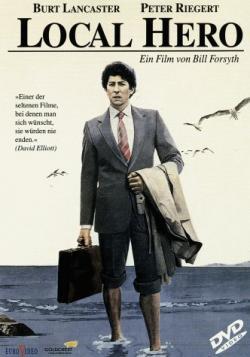 In the early 80s when greed was good, hair was big, and films were brash, Local Hero stood out like an honest man in the House of Commons. It contrasts the contentment of beachcomber Ben ( Fulton Mackay ) with the stressed life of Burt Lancasters Felix Happer; the fulfilment of Dennis Lawsons Gordon Urquhart with the empty life of yuppie oil-executive Mac. It is also at certain moments stunningly beautiful; director and writer Bill Forsyth letting some well-chosen Scottish locations in Aberdeenshire , the Highlands and Inverness -shire speak volumes.
As so often with Forsyth there are unexplained moments and running gags (for example is Jenny Seagroves scientist Marina really a mermaid?) that lend an innocent charm to the film. Where lesser producers than David Puttnam and more clichéd directors than Forsyth would have sought a score full of sweeping strings, they went for an original score by Mark Knopfler that fits perfectly  and with his huge popularity at the time helped publicise the movie, which cant have hurt either.
But the lyrical beauty is in the end a background for a very funny film: there are moments that hark back to Ealing comedies ; surreal conversations with crofters debating the merits of the supercars theyll buy when rich; the contemporary paradox of the Russian skipper being a capable capitalist; and good old-fashioned drunken bits.
Local Hero is clever, touching, illuminating and full of laughs; it will remain a British classic.