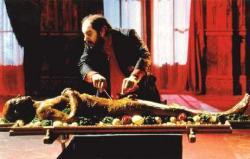 The Cook, the Thief, His Wife and Her Lover

Not a film likely to feature as a giveaway with The Daily Mail. The Draughtsmans Contract is probably Peter Greenaway s best work, but The Cook... has become his best-known, partly as a succès de scandale. Greenaway takes the basic love-triangle story and adds layers of style  costumes by Jean-Paul Gaultier, music by regular collaborator Michael Nyman  and gory Grand Guignol, with scenes of torture and forced cannibalism; and some almost pantomime elements. As ever with this director the audience is presented with carefully crafted painterly images which make it a pleasure to watch for the visual impact alone, though the squeamish may view it through their fingers. The film is equally erotic in its treatment of sex and of food, and is responsible in part for the (for some of us inexplicably) continuing view of Helen Mirren as sex-symbol; Michael Gambon gets his teeth into the role metaphorically and literally, his evil and pretentious gangster turn a world away from cosy Dumbledore; and Alan Howard provides quiet contrast in his unassuming Michael, bookish, sensitive and doomed. One is left wondering what Greenaway, producing luscious intellectual eye-candy on a shoestring, could do with the sort of budget third-rate Hollywood directors enjoy. Perhaps, however, the confines of art-cinema in fact push such creative forces to their best because of the restrictions they face, the trade-offs being freedom and not needing to satisfy the popcornerati.