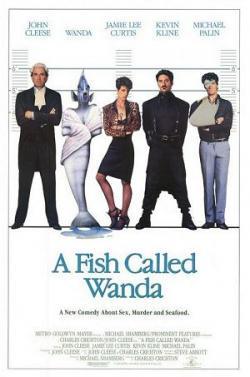 The 1988 hit A Fish Called Wanda shows that cross-pollination is productive: director and co-writer Charles Crichton (in his late seventies when the film was produced) made his name working on Ealing comedies, directing The Lavender Hill Mob among others; lead actor John Cleese (who shared the writing) and Michael Palin were known for from Monty Python ; and the otherwise very British cast including Geoffrey Palmer , Patricia Hayes and Stephen Fry is leavened with energetic American stars Jamie Lee Curtis and Kevin Kline (who won a best supporting actor Oscar for his pretentious-idiot-psychopath performance).
As regards plot too the film mixes things, the original heist storyline metamorphosing into a romantic comedy, with some wonderful moments of base humour : the slowest chase ever with a steam-roller flattening a stuck Kline; the unlucky terriers; Cleese hung upside down from a window; Palins horrific stutter. And while there are moments of Cleese-trademark British embarrassment his character has some depth, and eventually guts.
The film was a big hit, partly no doubt thanks to the enduring Python aura, but mainly because it pulls together seamlessly, has charm, and provides the genuine belly-laughs that are all too rare a thing in the cinema.