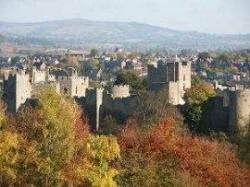 Acton Burnell
Did you know that the first true English Parliament  involving commoners as well as King and Barons  took place not in London but in Acton Burnell in Shropshire? This hugely significant event happened during a visit to the area by Edward I in 1283 or 1285. The ruins of the barn in which the parties met can still be seen there.
Bishops Castle
Did you know that The Three Tuns Inn on Market Square in Bishops Castle can lay claim to being the oldest working brewery in Britain? Beer has seemingly been brewed on the premises since at least 1642, when the first licence was granted. The brewery and pub are a mixture of Jacobean and Victorian architectural styles. We raise our metaphorical glass to this delightful survival.
Bridgnorth
Did you know that the shortest railway in Britain is the wonderful Castle Hill Railway in Bridgnorth? The line is only 201 feet, but using the funicular  the only working inland version in the country as I write and said to be the steepest  saves a testing flight of 200 steps between Bridgnorths High Town and Low Town.
Did you know that recent research by UCL geographers has pinpointed Apley Hall near Bridgnorth as the most likely model for P.G. Wodehouses Blandings Castle? As devotees of the finest series of novels in English will know, hints in the great works include the Wrekin being visible from the place; a lake in the grounds; and travelling times from both Shrewsbury and London. It doesnt hurt the idea either that our greatest prose stylist once stayed at the Hall.
Ludlow
Did you know that Henry VIII 's elder brother Prince Arthur has his heart buried in a silver casket beneath the chancel of St Lawrences Church in Ludlow? The rest of him is buried in some style at Worcester Cathedral . Arthur was travelling with his new wife, Catherine of Aragon , to Wales when he fell ill  possibly the terminal stages of TB  in Ludlow. Heart is by the way a nicer way of saying insides  the stuff removed when he was embalmed.
Shrewsbury
Did you know that Shrewsbury Flower Show is the "Longest Running Horticultural Show in The World", as recently acknowledged by the Guinness Book of Records? Its roots (sorry) go back to 1836 when an event limited to gooseberries and carnations was held; by 1857 it had blossomed (really sorry) further, a town centre marquee in use for a more general show; but what is recognized as the forerunner of the current event was first held in 1875.