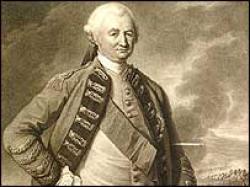 Born in Market Drayton, Shropshire
Born on 29th of September 1725
Died in London
Died on 22nd of November 1774

Robert Clive, Clive of India, laid the foundation for British rule in India. He defeated the French colonial powers, set up a sound administration, and in the process made a personal fortune by very dubious means.

Born on the Clive family estate near Market Drayton in Shropshire on September 29, 1725, when aged 18 Robert Clive was sent to Madras as a clerk in the East India Company. With Britain and France vying for control of Southern India Robert Clive enlisted in the army. In 1748 he distinguished himself at the Battle of Pondicherry. Further successful campaigns followed and with the British candidate for Nawab or ruler in place Clive returned to England in 1754 where he ran for Parliament.

In 1756 Clive returned to India as a Lieutenant Colonel and Governor of Fort St David. He led a relief expedition from Madras to retake Calcutta from the French supported Nawab of Bengal whom he decisively defeated at the Battle of Plassey. Following the battle he personally acquired £160,000 as spoils of war. He was made Governor of the East India Company (and considerably richer) having consolidated the companys hegemony.

Back in England Clive was elected MP for Salop in 1761 and knighted. Returning again to India in 1763 as Governor and Commander-in-Chief he restored order there with a series of anti-corruption measures and administrative reforms.

Back in England for the final time and now fabulously wealthy he was to become a victim of his own success. When the East India Company appealed to the British Government to save it from bankruptcy Clive was portrayed as being culpable and he had to defend his financial integrity before parliament. Although exonerated in 1773 he committed suicide on November 22, 1774.

Contributors: Do you have a site related to Robert Clive?
Supply some content for this page and we will gladly add a link to your site. Email here.