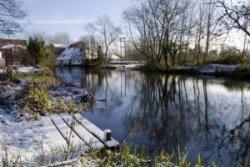 Bradwell
Did you know that the chapel of St Peter-on-the-Wall in Bradwell, Essex is probably the oldest extant church in all England  built in about 660AD using the handy stones and tiles of the Roman shore fort there. Its founder was Northumbrian monk Cedd, brother of St Chad, sent by King Oswy of Northumbria to Sigbert, the East Saxon king at the recently converted latters request.
Braintree
Did you know that the oldest timber-framed barn in the world is at Cressing Temple near Braintree? The huge Barley Barn was built in about 1206AD by the Knights Templar , and stands next to a more recent structure  well, Wheat Barn was erected in 1256. Cressing Temple was the first land in England granted to the Templars, the holding run to raise funds for the organisations work in the Holy Land. These days the complex hosts events, including weddings.
Chelmsford
Did you know that Britains first public broadcast was made from Chelmsford on June 15 1920? The pioneering Marconi organization made the broadcast, sponsored by The Daily Mail, from its New Street plant there, featuring the singing of Australian opera diva (and pudding inspiration) Dame Nellie Melba. In those interferencefree days it is said to have been received as far away Newfoundland.
Did you know that some historians claim Robert the Bruce was born at Montpeliers Farm in Writtle near Chelmsford, in 1274? Turnberry also claims the honour.
Chipping Ongar
Did you know that the oldest wooden church in the world is St Andrews at Greensted-Juxta-Ongar, near Chipping Ongar? Its nave has split-log walls which are at least 900 years old, and possibly more. The great oak logs were from Epping Forest, now about 10 miles away but in medieval times more extensive and thus closer.
Great Bentley
Did you know that the largest village green in England is at Great Bentley in Essex? It covers an area of roughly 43 acres  big enough to have been used as a golf course a century or so ago. Old Buckenham in Norfolk disputes the title, its green being 40 acres thus smaller, but some of their Essex rivals land once having held industrial buildings.
Great Dunmow
Did you knowthat the ' Dunmow Flitch ' is the oldest recorded competition in the world still running? Mentioned by Chaucer , it is believed to have begun in the 13th century. Married couples have to swear not to have repented of their union during the preceding year and a day in order to win a flitch of bacon, the veracity of their story tested by a mock court. Successes, however, are few and far between!
Hadstock
Did you know that St Botolphs Church in Hadstock has the oldest door in England? Its about 1000 years old! Set in a typical Saxon arch the door is of plain planking with iron hinges. The church was very possibly ordered to be built by Canute after his 1016 victory over Edmund Ironside at Assandun or Ashingdon .
Maldon
Did you know that All Saints in Maldon has the only triangular church tower in Britain? The decidedly strange late-Norman design is topped incongruously with a hexagonal spire. Various suggestions have been made to explain the triangular form: the need to fit in with the adjoining roadways; a French influence; that it's a symbolic reflection of the Trinity; and we should not forget that maybe it seemed like a good idea in the pub.
Romford
Did you know that Romford once staged Cheetah racing? Or at least tried to. In 1937 animals were imported from Kenya, with plans for events to take place up and down the country (as at Romford in greyhound stadia). The scheme failed for several reasons, not least concerns about the dangers posed by such beasts; and the fact that they werent fooled into the chase by a rag and stick flying past them.
Southend on Sea
Did you know that at 1.34 miles Southend Pier is the longest in the world? The original wooden version was begun in 1829; erection of the metal replacement (the creation of the same designer as that at Southport ) started in 1887. Perhaps its noblest hour was not as a pleasure spot but when it became HMS Westcliff  taken over by the Navy during WWII to act as a point of departure for convoys.
St Osyth
Did you know that the driest place in Britain is St Osyth in Essex? The village just west of Clacton has consistently been so over recent years, with an average annual rainfall of 507mm. To put that into context: one definition of a desert is that it has rainfall below 250mm; Sydney averages 1217mm precipitation; and Rome 875mm. The only way is Essex then.