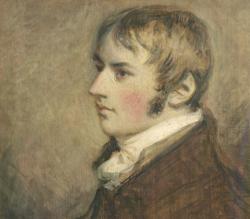 Constable is perhaps the most English painter of English scenes, his art in pictures like The Cornfield and The Hay Wain capturing a world that was to disappear within a generation of his death. To modern eyes his art may seem very formal, but in its day it was innovative and different enough to mean he enjoyed very limited commercial success, famously selling more paintings in France than in his homeland, though now many of his works now hang in the National Gallery, Tate, and Victoria and Albert Museum.
Born on June 11 1776 in East Bergholt, Suffolk, the son of a well-to-do miller and landowner, John Constable showed more interest in art than business from an early age. It took, however, intervention by Royal Academician Sir George Beaumont to persuade Constables father to let him go to London to study at the Royal Academy Schools.
Though the Royal Academy accepted his first picture for exhibition in 1802, it was not until 1829 that he was elected to the RA, becoming Visitor there in 1831.
In spite of resistance from his future wifes grandfather (he a rector, and Constable from mere trade stock), Constable married Maria Bicknell in 1816. They had seven children before Maria died from tuberculosis in 1828, but a large inheritance received by Maria just before her death freed Constable from most money worries (though he managed to waste much of it).
Constable painted dull if workmanlike portraits for the fees, and duller religious pictures likewise, but his genius was with landscapes, often incorporating the human into the landscape with great vigour as in his picture Boat-building near Flatford Mill, his ability to capture light and the skies in pieces such as Dedham Vale and Salisbury Cathedral also setting him apart from his contemporaries.
Suffolk provided the greatest scenes for his canvases, though he painted many pictures elsewhere in England. He died in London on March 31 1835, and is buried in Hampstead.

From bart on 13th May 2009
Worked in family mill. Studied at the Royal Academy Schools. Exhibited his first picture in 1802. Inheritance from father-in-law enabled him to devote himself to his landscape work. Expressed love of country, interested in effects of changing light, movements of clouds across the sky. Finest landscapes including The Cornfield and The Haywain are in the National Gallery, London.

Contributors: Do you have a site related to John Constable?
Supply some content for this page and we will gladly add a link to your site. Email here.