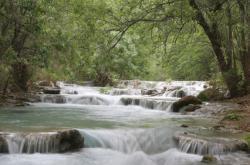 The River Eden is a river of exceptional water quality that flows through Cumbria. The Eden covers a distance of 90 miles and has a catchment area of just under 1,500 square miles. It is estimated that 167,000 people live within the Eden catchment.

The river rises on high ground, between High Seat in the Yorkshire Dales and Hugh Seaton, at Black Fell Moss, Mallerstang. Two other great rivers, the River Swale and River Ure, arise within a mile of the Eden from the same peat bogs. At the source the river is known Red Gill Beck but soon becomes Hell Gill Beck. The beck makes a turn north and joins together with Ais Gill Beck to become the River Eden. Just ahead of the meeting with Ais Gill Beck is Hell Gill Force, the highest waterfall along the river.

The river passes through the Pennine towns of Kirkby Stephen and Appleby-in-Westmorland . Along the way it accepts the waters of many becks running off the Pennines to the east. It also takes feeds from the lakes off to the west, such as the River Lyvennet, River Leith and the River Eamont which arrives via Ullswater and Penrith . After flowing through Wetheral the Eden joins with the River Irthing from the east. It then merges with the River Petteril and River Caldew from the south, as it passes through Carlisle.

Hadrian's Wall crosses the Eden at its junction with the River Caldew in north Carlisle . This confluence is only five miles before they reach their end at the tidal flats of the Solway Firth near the mouth of the River Esk.

The River Eden is known to be one of England's cleanest rivers. The river and its tributaries make up a Special Area of Conservation (SAC).An area of the river is classified as a Site of Special Scientific Interest (SSSI) in recognition of the variety and quality of wildlife there.

The Eden has 184 recorded plant species, more than any other river in Britain. The river supports a large population of white-clawed crayfish, and one that is living at the northern edge of its range in England. It is a successful breeding river for salmon and trout.

The picturesque town of Eden takes its name from the river on which it lies. The town offers the many visitors to the area a place to rest up, eat and even sleep over.