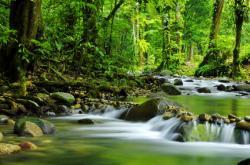 The river Esk runs mainly in Dumfries and Galloway, Scotland. The river rises in the hills that lay on the east of Moffat . The river has two main tributaries, the Black Esk and the White Esk, which merge with it at the southern end of Castle O'er Forest. One of several British rivers called the Esk, this Dumfries and Galloway Esk enters the sea at the Solway Firth . The river Esk also flows for a small distance into the English county of Cumbria before it enters the Solway. This makes it one of two rivers running through Cumbria named the Esk.