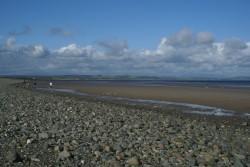 The Rhins of Galloway is a district of west Dumfries and Galloway that form a prominent double-headed peninsula in southwest Scotland. The Rhins extends for about 27 miles from Milleur and Corsewall Point in the north, down to the Mull of Galloway to the south. The Rhins also cover the area inland to the Water of Luce. The main towns there are Stranraer and Portpatrick and these are joined by the villages of Kirkcolm, Leswalt, Lochans, Stoneykirk, Sandhead, Ardwell and Drummore
as the main centres of population. Fishing, agriculture and tourism are the main source of income and employment in the Rhins. The area has shipping and ferry connections with Ireland across one of the narrowest points of the Irish Sea. There are 50 miles of coastline in the Rhins, some of it sandy beaches of excellent quality. The western coastline tends to have steep rugged cliffs and occasional inlets, with the more sheltered eastern coast featuring those sandy beaches and a more gentle landscape. The southernmost point of the Rhinns, The Mull of Galloway, also marks the furthest point south in Scotland. The area has been designated a site of special scientific interest and is a RSPB nature reserve. Razorbills, Guillemots and Puffins are among the many bird species to be found nesting on the steep cliffs.